Fused quartz is relatively chemically-pure silica, or SiO2, which is not in crystalline form but rather in vitrified or glass form, with no true melting point. It can be used for some special glass applications. However, this is not very common due to silica's high glass transition temperature of over 1200 °C (2192 °F).[1] Normally, other substances are added to simplify processing. One is sodium carbonate (Na2CO3, "soda"), which lowers the glass transition temperature. However, the soda makes the glass water soluble, which is usually undesirable, so lime (calcium oxide [CaO], generally obtained from limestone), some magnesium oxide (MgO) and aluminium oxide (Al2O3) are added to provide for a better chemical durability. The resulting glass contains about 70 to 74% silica by weight and is called a soda-lime glass.[2] Soda-lime glasses account for about 90% of manufactured glass. 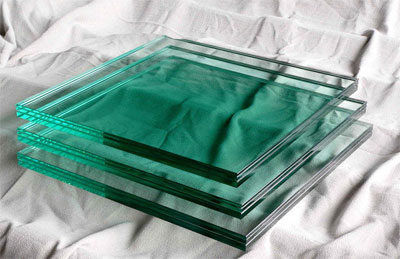